Type I collagen is the most abundant protein in the body and is a major structural component of bones, tendons, ligaments and joint cartilage. It accounts for 80% of proteins within bone tissue and is the main extracellular matrix protein that is calcified within bone, making it responsible for bone strength and toughness. A loss of collagen observed with age leads to a decline in bone strength and an increased risk of fractures

Type I collagen is a heterodimer that consists of two α1 chains and one α2 chain, encoded by the COL1A1 and COL1A2 genes respectively. A genetic variant within the COL1A1 gene is believed to affect the ratio of collagen α1 to α2 chains, modulating bone strength and fragility.

COL1A1 Sp1 is a G>T single-nucleotide polymorphism (SNP) on human chromosome 17 known to modulate expression of the alpha 1 chain of collagen type 1. This functional variant has adverse effects on bone composition and mechanical strength and associations between the COL1A1 Sp1 SNP, bone mass, fracture risk and osteoporosis has been observed in several populations and meta-analyses.

The COL1A1 Sp1 T allele leads to an increased binding affinity for the Sp1 transcription factor and greater transcription of COL1A1. This variant results in an increased ratio of collagen type I α1 protein relative to α2. These unbalanced collagen fibres pose a risk factor for osteoporosis and bone fragility by influencing bone mass and quality.

Figure 1 to the right taken from Lin et al (2009) illustrates ‘Suggested mechanism of osteoporosis associated with polymorphisms in the 5′ flank of COL1A1’ (Lin et al). Polymorphisms in the 5′ flank of COL1A1 regulate binding affinity of several critical nuclear binding proteins including Nmp4, Osterix and Sp1. This increases transcription of haplotype 2 which causes increased expression of COL1A1 mRNA, and over production of the alpha 1 chain relative to alpha 2, such that a proportion of collagen produced by osteoblasts is in the form of alpha 1 homotrimers. This adversely affects mineralization of bone, resulting in reduced BMD and an increased risk of fracture. (Human Molecular Genetics, Volume 18, Issue 15, 1 August 2009, Pages 2729–2738, https://doi.org/10.1093/hmg/ddp205).

Rojano-Mejía et al. 2013 showed that individuals with the COL1A1 Sp1 G allele tend to have a greater bone mineral density (BMD) at the lumbar spine. Singh et al. 2013 similarly observed a dose effect of the COL1A1 Sp1 T allele on lumber spine BMD, with individuals with the T allele presenting with a lower BMD and higher risk of osteoporosis. The association of the COL1A1 gene with low BMD, osteoporosis and subsequent fracture risk has been observed in Caucasian, Indian, Mexican, Kazakh and Chinese female populations. Marini et al. 2013 similarly observed an association between theCOL1A1 Sp1 TT genotype and low BMD at both spine and femur sites in an Italian mixed male and female population.

A meta-analysis of 32 studies found that when considering the COL1A1 Sp1 polymorphism, individuals with the TT genotype tend to have lower BMD and greater fracture risk in comparison to those with the GG genotype. This genetic variation can be used as a marker for osteoporotic fracture risk and individuals with the risk T allele need to prioritize interventions to reduce risk of osteoporosis and fracture.

Figure 1: Suggested mechanism of osteoporosis associated with polymorphisms in the 5′ flank of COL1A1 (Jin et al). 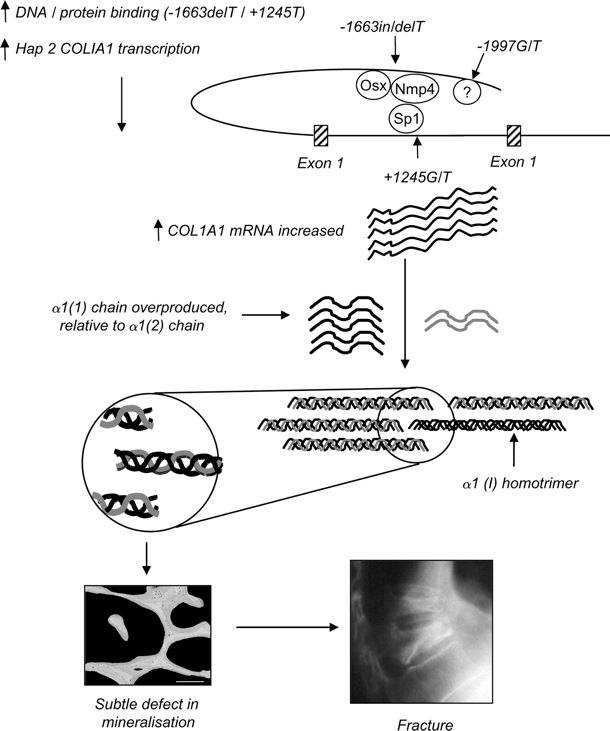 Osteoporosis is a multifactorial disease influenced by both genetic and environmental factors that need to be considered. Screening of genetic variations associated with risk for osteoporosis may enable the early detection of at-risk individuals, allowing the optimization of preventative interventions as well as treatment.

A 2018 randomized, placebo-controlled trial found that supplementation with 5g of specific collagen peptides over a 12 month period significantly increased BMD of the lumbar spine and femoral neck in postmenopausal women who had age related decline in BMD. Marker of bone formation, bone specific amino-terminal propeptide of type I collagen (P1NP), also significantly increased in the supplemented group, whereas the marker for bone degradation, C-telopeptide of type I collagen (CTX 1), increased in the placebo group. This affirms the possible use of collagen supplementation in promoting BMD and preventing bone loss.

Other interventions to focus on include a long-term regular exercise program and optimal vitamin D and calcium intake. Sufficient protein intake is also necessary for the maintenance of the musculoskeletal system. Both vitamin D status and BMD testing are useful screening tools for individuals at high risk for osteoporosis.

Individuals at risk for osteoporosis and/or with a low BMD also need to limit caffeine intake to 1-2 servings of caffeinated beverages per day, alcohol should be limited to no more than two units per day, and smoking avoided.