The 1000 Genomes Project Database and the genome Aggregation Database (gnomAD) reports global frequencies of 24.5% and 25.73% respectively for the variant T-allele (NIH). The prevalence of the TT genotype varies across ethnic groups and regions. In Europe, Asia, Central America and South America, the TT prevalence reportedly ranges from 10% to 32%, whereas different African populations have a prevalence of only 0–3%. Other studies reported that the prevalence rates of the TT genotype were 25% and 57% in Mexican Mestizo and American-Indian populations, respectively.

The methylenetetrahydrofolate reductase (MTHFR) enzyme plays an essential role in the folate and homocysteine (Hcy / HCys) metabolic pathways, where it is essential for the conversion of Hcy to methionine. Genetic polymorphisms in MTHFR have been linked to cardiovascular diseases, stroke, metabolic syndrome, psychiatric disorders, and certain types of cancer.

The 677 C>T SNP may result in MTHFR impairment or deficiency, which is reportedly the most common genetic cause of elevated levels of plasma Hcy (called hyperhomocysteinemia or abbreviated as HHcy) in healthy populations. The MTHFR 677 C>T polymorphism has been described as an independent predictor of plasma total Hcy. Concentrations of Hcy are found to be highest in TT homozygotes with suboptimal vitamin B status (of folate, vitamin B2, B6 and B12).

Supplementation with B vitamins, particularly folate and vitamin B2, have been found to lower Hcy levels and potentially help overcome the negative health effects of the MTHRF C677T polymorphism.

The MTHFR enzyme catalyses the conversion of 5,10-methylenetetrahydrofolate to 5-methyltetrahydrofolate (5-Methyl-THF) in an irreversible reaction. This enzyme, which requires riboflavin (vitamin B2) as co-factor, is critical for the regulation of available folate in the remethylation of Hcy.

More than 40 mutations have been identified in the MTHFR gene, located at chromosome 1p36.3. The most common and functional polymorphism, 677 C>T, results in a C-to-T transition at position 677, which causes the substitution of alanine with valine (Ala222Val). The mutation results in the coding of a thermolabile enzyme that has an estimated 30% reduction in activity in heterozygotes (CT) and 60% reduction in homozygotes (TT). Individuals homozygous for the variant T-allele (TT) reportedly have significantly higher levels of Hcy and lower levels of serum folate when compared to controls. This implies that individuals with the TT genotype may need to consume more folate (approximately 1.4 times more) to maintain serum folate levels similar to individuals carrying the C-allele.

Molecular studies pursued on individuals carrying the TT genotype have shown that mutated MTHFR enzymes have a decreased affinity for the riboflavin (vitamin B2) co-factor, which has been recently shown as an important modulator of Hcy concentration.

The MTHFR 677C>T polymorphism has been described as an independent predictor of plasma total Hcy (tHcy). The remethylation of Hcy by methionine synthase (MTR) involves the donation of a methyl group from 5-Methyl-THF to Hcy, resulting in the formation of methionine and THF. The enzyme, MTR, requires vitamin B12 (cobalamin) as a cofactor.

Figure: Homocysteine and methionine biosynthesis together with the metabolic processes of trans-sulfuration and re-methylation linked to the folate cycle. (Tinelli et al, 2019). 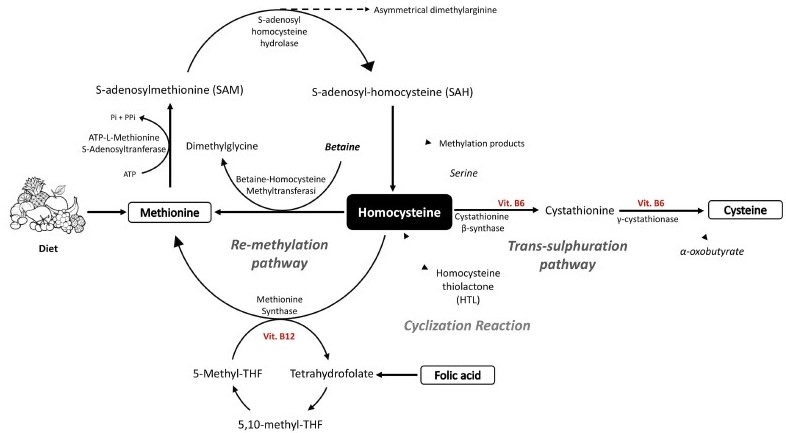 Elevated tHcy represents a major risk factor of cardiovascular and cerebrovascular diseases. A 2012 meta-analysis considered published and unpublished results in the area and estimated that the TT genotype carried a 15% excess risk of heart disease (based on published results). Moreover, lower serum folate and higher plasma tHcy may also be causes of neural tube defects (NTDs), cognitive dysfunction and depression.

A moderate increase of Hcy levels over a lifetime appears to have little effect on coronary heart disease (CHD), whereas the 677 C>T SNP strongly influences the levels of the Hcy and cardiovascular risk. Subjects with the TT genotype show Hcy levels 20% higher than those with the CC genotype. The heterozygous CT genotype has an intermediate effect but is closer to the TT genotype than CC. A meta-analysis study on Hcy blood levels highlighted that a 25% reduction in Hcy is associated with a significant reduction of ischemic heart disease.

Figure: Pathologies in which homocysteine has a fundamental role in the onset and development (Tinelli et al, 2019). 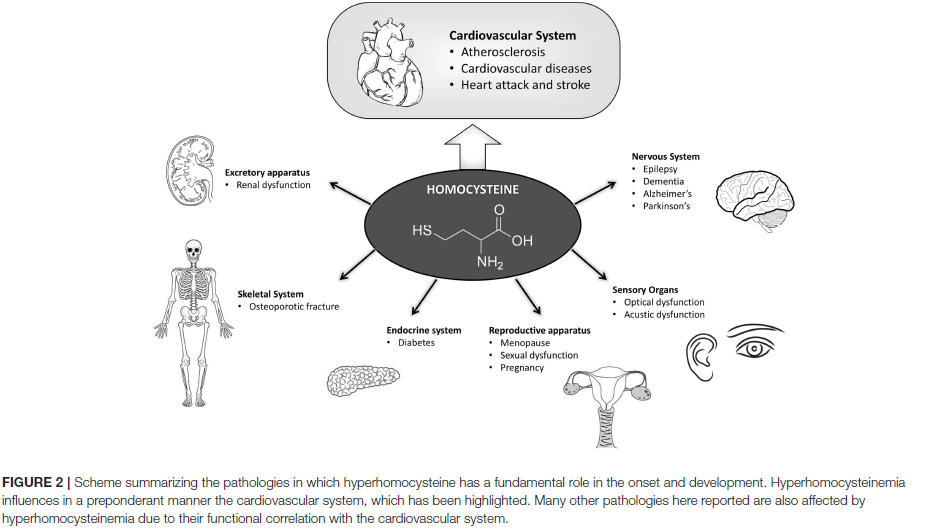 In addition to genetic causes, habits and lifestyle have also been identified as being responsible for HHcy. For example, nutritional deficiencies of some of the co-factors involved in Hcy metabolism—such as folic acid, vitamin B6, vitamin B12, and betaine has been implicated. Additionally, Hcy levels tend to increase with age both in males and females and may vary according to different habits, such as cigarette smoking, alcohol consumption, and sedentary lifestyle.

It has been widely demonstrated that a folate deficiency can be followed by increased serum or plasma tHcy concentrations and reduced red blood cell (RBC) folate levels.

A decline in MTHFR function is speculated to influence cancer risk by two potential mechanisms: (1) an increased chance of point mutations and DNA/chromosome breakage may be initiated by a cascade that leads to the increased incorporation of uracil into DNA in place of thymine; (2) a less active form of MTHFR leads to lower SAM levels and consequently to hypomethylation which may increase the risk of cancers.

Epidemiological studies have showed that MTHFR 677 T-allele carriers may be at increased risk of suffering obesity, hypertension, insulin resistance or type 2 diabetes mellitus, as well as lipid disorders – all of which are metabolic disturbances related to MetS. This could relate to a correlation between HHcy and DNA hypomethylation in MetS.

A recent case-control study performed in a Chinese population found that the risk of MetS was higher for the TT genotype carriers (1.59 times higher) than for the CC genotype and C-allele carriers. With MetS, the TT genotype increased the risk of elevated blood pressure, fasting glucose levels, and triglyceride levels. Patients with MetS and the TT genotype showed more severe abdominal obesity, dyslipidaemia, insulin resistance, elevated blood pressure, elevated fasting glucose levels and HHcy compared with those with the CC genotype.

Folate, a water-soluble vitamin obtained from fruits and vegetables, is considered an essential co-factor in the one-carbon metabolism pathway and is essential in many biochemical processes such as amino acid metabolism, purine and thymidylate synthesis as well as DNA methylation. The folate pathway is closely associated with Hcy metabolism.

Dietary folates, which predominantly exist as polyglutamates, must be deconjugated to monoglutamates prior to absorption in order to be transported. Folate monoglutamates as well as synthetic folic acid (pteroylmonoglutamic acid [PteGlu]) are absorbed in the duodenum and upper part of the jejunum by the high-affinity proton-coupled folate transporter PCFT1 (SLC46A1). For PteGlu, however, an additional step to enter folate metabolism is required: it must first be reduced to dihydrofolate (DHF) and then to the active form, 5-Methyl-THF. After entering the cell, 5-Methyl-THF functions as a methyl donor for Hcy remethylation. The methyl group is removed by 5-Methyl-THF and transferred firstly to the vitamin B12 coenzyme, and later to Hcy.

Worldwide study has indicated that folate levels show a protective role in a variety of cancers. The role of folate in BC has been investigated in several dietary studies. Most have shown folate consumption to be inversely related to BC risk with an adequate folate intake associated with a substantially decreased risk of cancer. Kumar et al. (2015) have stated that the effect of MTHFR on breast cancer risk in any particular population may depend on the intake level of folate food in that population.

Although studies have indicated significant differences in serum folate and tHcy concentrations in individuals with the 677 C>T SNP at baseline, supplementation with 400μg/day folic acid eliminated these differences in individuals with the MTHRF C677T genotype in a study from Hiroaka et al (2017). Studies have also showed that high-dose folic acid supplementation (up to 4000μg/day) significantly lowered tHcy concentrations for all MTHFR C677T genotypes and the effect size of tHcy reduction in the TT genotype was estimated to be 2.4-fold compared with that in the CC genotype. A meta-analysis from Zhang et al. (2014) indicated that daily supplementation with folic acid could lower the plasma Hcy level by approximately 25% and adding vitamin B12 further lowers the level by approximately 7%, indicating the pivotal role of vitamin B supplements in significantly lowering Hcy levels.

Although a high frequency of MTHFR polymorphisms has been found in mothers with foetuses affected by NTDs and cardiac malformations, a relevant case-control study demonstrated that consuming folic acid, vitamin B12 and B6 appears to reduce these congenital malformations.

A health promotion program designated the “Sakado Folate Project”, implemented from 2006-2015, aimed to achieve personalized nutritional intervention based on the MTHFR C677T genotype for the prevention of various diseases including cardiovascular diseases and dementia. Its results suggested that intervention of folate status by notification of genotype was effective in motivating individuals to change their lifestyle and improve nutrition status. Similar results were reported in a randomized control trial demonstrating that genotype-based personalized dietary advice was understood better and was more likely to be followed than general dietary advice.

Vitamin B12 (cobalamin) is considered an essential co-factor for the MS enzyme, which requires 5-Methyl-THF to convert Hcy to methionine. Vitamin B12 deficiency has been associated with haematological and neurological disorders, as well as with HHcy and NTDs.

Results from a recent case-control study showed a significant association between homozygosity for the T-allele (TT genotype) and vitamin B12 deficiency in a Jordanian population. This is consistent with a recent Thuesen et al. (Sladoje et al, 2017) report. Al-Batayneh et al. (2018) proposed that vitamin B12 deficiency might be due to mutations and/or polymorphisms in the MTHFR gene. Although they suspect that the T-allele may affect the utilisation and intestinal absorption of vitamin B12, the metabolic explanation of the association between B12 deficiency and TT homozygosity is yet to be resolved. It is thus recommended that vitamin B12 status be monitored and managed appropriately in individuals with the TT genotype.

Furthermore, randomised controlled trials have respectively shown that vitamin B2 administration reduced hypertension induced by HHcy, and that high-dose folic acid, vitamin B6 and B12 consumption slowed the rate of accelerated brain atrophy in subjects affected by mild cognitive impairment.

Vitamin B6 is the cofactor for serine hydroxymethyltransferase (SHMT), which forms 5,10-methylenetetrahydrofolate, the MTHFR substrate, and is also involved in homocysteine transsulfuration.

Studies have shown in addition to the administration of folic acid, that Vitamin E, vitamins B6 and B12, as well as betaine reduces the risk of thrombosis and cardiovascular dysfunction in patients with severe HHcy.