The 1000 Genomes Project Database and the genome Aggregation Database (gnomAD) reports global frequencies of 58.9% and 53.08% respectively for the T-allele (NIH).

Oxidative stress may contribute to the development of conditions such as type 2 diabetes, cardiovascular diseases, various inflammatory conditions, and cancer. Reactive oxygen species (ROS) are known to induce DNA damage and may contribute to carcinogenesis.

As an endogenous antioxidant, manganese superoxide dismutase (MnSOD) is the only one found within the mitochondria, which is a major site for ROS production. Studies have revealed that the abnormal expression of MnSOD may be involved in many types of cancers including breast, lung, bladder, colorectal and prostate cancer, although findings are conflicting. The Ala16Val SNP could interfere with the functioning and availability of MnSOD to decrease its antioxidative abilities and alter cancer risk.

Research suggest that the Ala16Val polymorphism and cancer risk could be modulated by dietary factors. The risk for breast cancer is reportedly increased in Ala-allele (C-allele) carriers who also maintain an inadequate antioxidant consumption (or fruit and vegetable intake).

Reactive oxygen species (ROS) are known to induce DNA damage, including oxidized bases, the formation of DNA adducts and DNA strand breaks, which could lead to genomic instability and oncogenesis. The damaging effects of ROS could be countered by the antioxidant action of non-enzymatic antioxidants (including a variety of ROS quenchers such as vitamins, minerals [iron, zinc, copper, selenium, and manganese], thiols [including glutathione or GSH], uric acid, bilirubin, and flavonoids), or by endogenous antioxidant enzymes.

Superoxide dismutase (SOD) is one of the key enzymes involved in antioxidant function. It is responsible for converting the harmful superoxide radical (O2–) to hydrogen peroxide (H2O2), shielding the organism against its damaging effects. However, under certain circumstances, an increased MnSOD activity may lead to cell damage by H2O2 overproduction. It is thought that genetic polymorphisms in such an enzyme could lead to altered functionality and thus reduced ROS detoxification.

Among the endogenous antioxidants, SOD2 (or also called manganese superoxide dismutase, MnSOD) is the only one found within the mitochondria, which is a major site for ROS production. Most of the ROS generation occurs during the electron transport chain (ETC) in the mitochondria, where large amounts of O2– are formed from oxidative phosphorylation. After the alteration of O2– by SOD, antioxidant enzymes catalase (CAT) and glutathione peroxidase (GPx) utilise H2O2 as substrate to further convert and neutralise it to water (H2O) and oxygen. The SOD2 enzyme possesses an active site that has manganese as transition metal for rapid electron exchange within the mitochondria.

The MnSOD gene, located on chromosome 6q25.3, consists of four introns and five exons. The MnSOD gene has been described as a tumour suppressor gene as it reduces oxidative stress and mitochondrial DNA damage that could play a significant role in carcinogen­esis. The MnSOD protein is synthesised in the cytoplasm, after which it is transported into the mitochondria to serve its essential antioxidative function. Although several polymorphisms have been identified (at least 190 SNPs in humans), rs4880 is most extensively studied.

Reports indicate that, in the Val-variant (T-allele), impaired co-translational import is observed, which causes for slower mitochondrial transportation, lower levels of the mature exogenous protein, lower SOD2 activity and decreased mRNA expression and stability than the Ala-variant. A previous study has also shown that the Ala-variant allowed for more efficient MnSOD localisation to the mitochondria than the Val-variant form; the Ala-variant precursor reportedly generates 30-40% more of the active, matrix-MnSOD in comparison with the Val-allele precursor. Considering these findings, the Val-allele of MnSOD may be associated with less enzymatic activity, higher levels of ROS and increased susceptibility to cancer.

On the other hand, if the Ala-variant of MnSOD is related to higher SOD2 activity, it could translate into a higher production of H2O2 and elevated metastatic activity in individuals unable to further neutralise such radicals.

It remains important to consider that carcinogenesis is a complex and multifactorial process, often not reliant on a single SNP.

The rs4880 SNP (C>T or Ala16Val), a missense mutation, is found in exon 2 of the MnSOD  gene. The C-to-T mutation results in an amino acid change at codon 16, where alanine (Ala) is substituted with valine (Val). Since this residue is nine amino acids upstream of the cleavage site, it has also been called Ala9Val. The amino acid substitution produces a β-sheet secondary structure instead of the expected α-helix structure, which may decrease the transport efficiency of the enzyme into the mitochondria, modifying the antioxidant defence against ROS.

Figure: Differential MnSOD availability in the mitochrondria according to the Ala16Val homozygous genotypes (Bresciani et al, 2013). 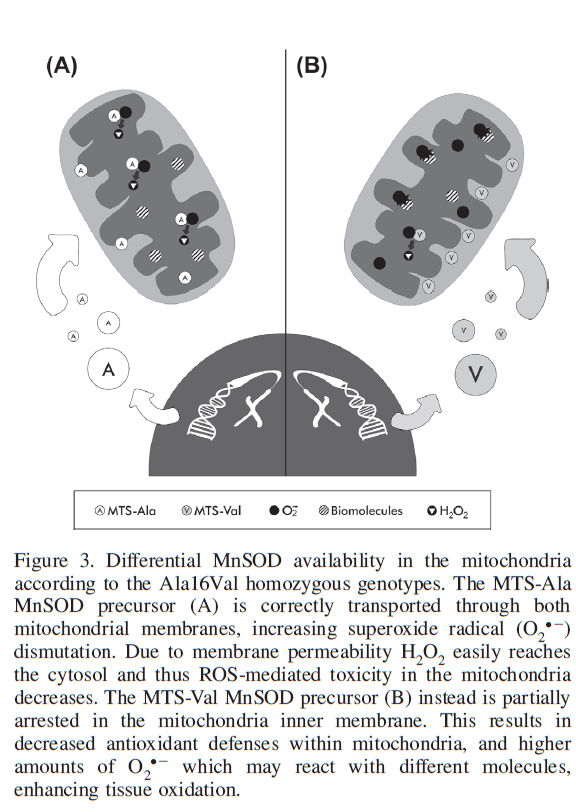 Although this SNP is said to seriously impact the function of SOD2, studies on the relation between the SOD2 rs4880 polymorphism and the development of various cancers seem conflicting. Several studies have found an association between the Val-allele and increased cancer risk (such as breast, lung and pancreatic cancer), although the majority of studies shows the Ala-variant to be associated with higher cancer risk such as breast, esophageal, colorectal, prostate and cervical cancer, while other studies however, find no significant associations.

A recent 2018 meta-analysis from Wang et al. found the rs4880 SNP associated with an increased overall cancer risk. The subgroup analysis further indicated a specific risk only for prostate cancer and increased cancer risk in Caucasians. The authors have considered 88 studies with 33 098 cases and 37 831 controls to find no significant association between this polymorphism and breast cancer risk; this is consistent with many previous meta-analyses. In 2017, a meta-analysis from a different group of researchers also failed to find a signifi­cant relationship between the rs4880 polymorphism and breast cancer risk or survival, although in Caucasian patients, the TT genotype (Val/Val) may marginally decrease the risk of breast cancer in comparison to the CT + CC genotype (Ala-allele carriers). This meta‑analysis consisted of 18 481 cases and 19 527 controls from 27 cohorts or case‑control studies for risk analysis and 5 746 cancer patients from eight studies for survival analysis.

Three years before, Kang (2015) completed a meta-analysis utilising 52 genetic studies (a total of 59,329 individuals comprised of 26 865 cancer patients and 32 464 control subjects) to report a lack of any association between the rs4880 SNP and overall cancer risk. The stratified analysis by cancer type found a significant association between the T-allele (Val-allele) and lung cancer and non-Hodgkin lymphoma. In the case of breast cancer, prostate cancer, bladder cancer and lymphoma, no associations were found. This is in line with previous meta-analyses that also failed to verify the link between SOD2 polymorphism and breast cancer and bladder cancer risk.

Liu et al. (2012) considered 14 studies (17 842 subjects) in their meta-analysis to find no significant association between the rs4880 SNP and breast cancer risk in the overall analysis. The stratified analysis for breast cancer risk by menopausal status and lifestyle factors, however, yielded significant results. Women carrying the Ala-allele who are premenopausal, or have a history of smoking, a body mass index (BMI) ≥ 25kg/m2 or who use oral contraceptives, were all found to have an increased risk for breast cancer. There was no significant association between breast cancer risk and alcohol consumption and ethnicity. Previous findings from Mitrunen et al. (2001) were similar in that postmenopausal women who had undergone oestrogen replacement therapy and carried the Ala-allele, had a 2.5-fold higher risk of breast cancer (Bag et al. 2008).

A much earlier meta-analysis from Bag et al. (2008) included 7 366 cases and 9 102 controls; the authors also found no overall association of MnSOD Val16Ala polymorphism for cancer risk.

Despite genetic importance, environmental factors such as dietary pattern and exercise have been found integral in the development of cancer. Different studies have analysed the combined effect of the MnSOD SNP with factors that may increase ROS production, such as smoking and alcohol intake. Several studies have also investigated the association between dietary intake of antioxidant-rich foods and the rs4880 polymorphism in breast cancer, prostate cancer and cervical cancer. Results suggest that the Ala16Val polymorphism and cancer risk could be modulated by dietary factors, although research remains somewhat conflicting.

Generally, diets rich in fruits and vegetables are associated with lower risk of cancer, probably partially ascribed to the antioxidant properties of these foods. One of the earliest studies from Ambrosone et al. (1999) found that women homozygous for the Ala-allele and with a lower antioxidant intake, presented a higher risk for breast cancer development. On the other hand, women carrying the Ala-allele and consuming adequate dietary antioxidants such as fruits, vegetables, etc., were later found to be at a decreased risk for breast cancer.

Ambrosone et al. (1999) reported an association between premenopausal Ala-allele carriers who had a low antioxidant consumption (defined as an intake of fruit and vegetables as well as dietary ascorbic acid, α-tocopherols, and carotenoids below the median) and increased breast cancer risk. An association of the MnSOD Ala16Val SNP with plasma carotenoid concentrations has also been reported for prostate cancer risk and aggressiveness, with a significant higher risk from the combination of low antioxidant status and the homozygous Ala genotype.

The potential interaction between the rs4880 SNP and antioxidant status on cancer risk has also been described for other cancer types, such as cervical cancer.

The Ala-allele association with cancer risk, driven by an antioxidant-poor diet, may be related to the potential imbalance in the H2O2 production. The overproduced H2O2 may react with metal ions yielding highly carcinogenic ROS, such as the hydroxyl radical (HO–). In fact, it has been observed that higher iron intake was associated with greater than 2-fold increase in risk on aggressive prostate cancer cases presenting with the homozygous Val genotype.

A combined effect for the Val/Val genotype and smoking has been found in lung cancer patients. A meta-analysis from Liu et al. (2012) however supported previous findings from Mitrunen et al. (2001) that there is an increased breast cancer risk for female smokers carrying the Ala-allele. An association between the Ala-allele and increased prostate cancer risk in smokers with a low vitamin intake has also been identified. Slanger et al. (2006) however, identified no association between the rs4880 SNP and smoking in a German population.

Although the Liu et al. (2012) meta-analysis revealed no significant association for women using alcohol, it has been reported that female Ala-carriers who consume 19 g alcohol/day or more presented an increased risk of breast cancer in a German population. Mitrunen et al. (2001) previously demonstrated that women who consumed alcohol and carried the Ala-allele had a 2.2-fold greater risk of developing breast cancer than those homozygous for the Val-allele.

Association between MnSOD Val16Ala Polymorphism and Cancer Risk: Evidence from 33,098 Cases and 37,831 Controls.