The 1000 Genomes Project Database and the genome Aggregation Database (gnomAD) reports global frequencies of 28.9% and 20.54% respectively for the variant T-allele (NIH). According to the Ensembl database, the T allele polymorphism occurs in approximately 25% of the global human population and is particularly common in people of Chinese ethnicity (approximately 50%). Studies have shown a wide variation of the allele frequency across ethnic groups, the homozygous variant genotype has been reported as rare as 2% in white population whereas it is much more frequent Asian populations.

The NAD(P)H quinone oxidoreductase 1 (NQO1) enzyme has been linked to several protective roles against the development of cancer. It is responsible for the detoxification of environmental carcinogens as well as for the reduction of endogenous quinones into hydroquinones, thus preventing the formation of reactive semiquinones and a variety of other reactive oxygen species (ROS).

The 609 C>T polymorphism variant T-allele has been associated with a significant reduction in NQO1 enzyme stability and function, which may contribute to various cancer types, such as breast cancer. Since NQO1 also bioactivates several kinds of procarcinogens, a decreased activity of the NQO1 enzyme is speculated to have a dual effect on carcinogenesis.

Epidemiologic studies indicate possible inverse associations between the consumption of cruciferous vegetables and the risk of various cancers. Some bioactive compounds, such as sulforaphane found in cruciferous vegetables, may upregulate phase II detoxification enzymes such as NQO1 by inducing the expression of nuclear factor erythroid 2-related factor 2 (Nrf2).

NAD(P)H quinone oxidoreductase 1 (NQO1), an intracellular, cytosolic flavoenzyme, has been linked to several protective roles against the development of cancer. Its alternative (prior) name in literature is diphtheria toxin diaphorase (DT-diaphorase), or it is also commonly called quinone reductase.

NQO1 is a phase II detoxification enzyme, mainly responsible for the detoxification of quinones by catalysing their obligatory two-electron reduction to their respective hydroquinones, thus preventing the one-electron reduction of these compounds into reactive semiquinones and a variety of other reactive oxygen species (ROS). It has also been described as a multifunctional antioxidant that scavenges for superoxide (in addition to superoxide dismutase [SOD]), as an exceptionally versatile cytoprotector and in a non-enzymatic role, as a stabiliser for the tumour suppressor proteins p53, p73 and p33.

In addition to quinones, NQO1 can catalyse the reduction (and detoxification) of environmental carcinogens such as nitrosamines, heterocyclic amines (HCA), polycyclic aromatic hydrocarbons (PAHs) derived from red meat, processed meat and cigarette smoke condensate, while it also reduces imidazoles and iron (III) ions. The enzyme has a unique feature in that it works with almost equal efficiency with the cofactors NADH and NADPH. Its catalytic function requires a tightly bound FAD cofactor.

Figure: The multiple roles of NQ01 in the metabolism of established carcinogens (Lajin et al. 2013). 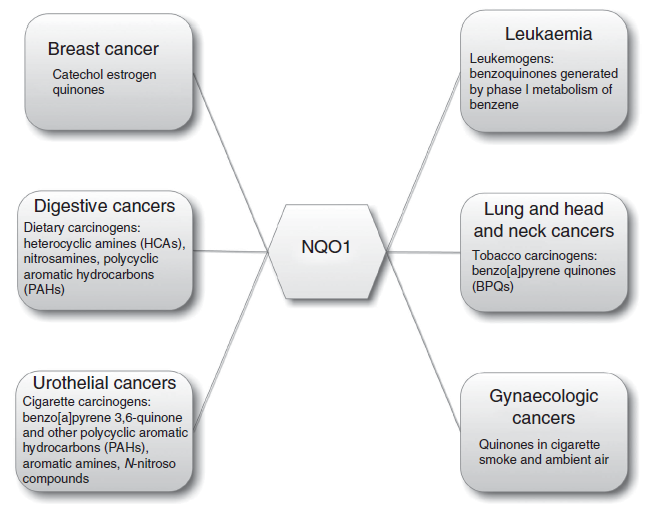 The NQO1 enzyme is encoded by the NQO1 gene which is located on chromosome 16q22.1. The gene contains 6 exons and is very commonly expressed in all tissues. More than 270 SNPs have reportedly been identified in the NQO1 gene. The 609 C>T (rs1800566) polymorphism, present in exon 6 of the gene, is described as the most common and influential SNP of NQO1. This SNP results in a proline-to-serine amino-acid change at codon 187 of the protein (Pro187Ser). The variant T-allele is thought to radically influence the functioning of the NQO1 enzyme, where its homozygosity (TT) results in virtually complete elimination of enzymatic activity (2–4% activity of the wild type), whereas heterozygosity (CT) yields decreased enzymatic activity by 3-fold compared with homozygosity for the wild-type allele (CC).

The stability of the enzyme is reportedly affected by the mutation, whereby the T-allele results in its rapid ubiquination and degradation by the proteasome. This implies that the SNP primarily affects the susceptibility of the enzyme to bodily degradation. Subsequent research has indicated that the unstable polymorphic (T-allele) structure is considerably more mobile and prone to unfolding. The C609T SNP would thus influence the mobility of the enzyme and the flexibility of NQO1 is critical to its function. Mobility is required for catalysis and is likely to mediate communication between the active sites. Inappropriate flexibility, however, can result in dysfunction: failure to fold and the consequent dramatically reduced affinity for FAD (approximately 10- to 50-fold) compared with the wild-type. This is suggested to increase the risk of various types of cancer.

The C609T polymorphism is thought to play a role in the susceptibility for developing several types of cancer including colorectal cancer, lung cancer, oesophageal cancer, breast cancer and hepatocellular carcinoma. However, the results remain inconsistent rather than conclusive. Studies have reported that the NQO1 enzyme not only detoxifies carcinogenic compounds, but also bioactivates several kinds of procarcinogens; thus, decreased activity of the NQO1 enzyme may have a dual effect on carcinogenesis. Another hypothesis proposed that the less stable and active polymorphic form of NQO1 is likely to be less effective at stabilising p53, providing a contributing explanation for the increased cancer risks associated with this mutation.

NQO1 can be induced by numerous natural bioactive compounds via Nrf2-dependent mechanisms. Notably, nuclear factor erythroid 2-related factor 2 (Nrf2) is a major basic leucine zipper-containing transcription factor which controls gene expression of an elaborate network of cytoprotective proteins (including antioxidant and detoxifying enzymes such as NQO1) that defend cells from electrophiles and free radicals, playing a pivotal role in the prevention of human carcinogenesis.

A meta-analysis from Lajin et al. (2013), including a total of 92 studies (21 178 cases and 25 157 controls), found that the variant T-allele was strongly associated with overall cancer risk in the total population. Stratification by ethnicity revealed a significant association in Caucasian populations although in the stratification by cancer site, only bladder and stomach cancers showed a statistically significant association.

A major contribution to the development of breast cancer has been attributed to unbalanced oestrogen oxidative metabolism which generates genotoxic metabolites such as reactive oestrogen quinones and oxygen free radicals that can react with DNA to form unstable oestrogen–DNA adducts. NQO1 may be particularly relevant for breast carcinogenesis because the polymorphism in NQO1, which reduce the conversion of quinones into catechols, could be considered an important factor that produces higher levels of mutagenic reactive quinones in the metabolism of oestrogen. Peng et al. performed a 2014 meta-analysis to determine the association between the C609T SNP and breast cancer susceptibility. The analysis of ten studies with 2 773 cases and 4 076 controls showed a significant association only in Caucasians. Stratification by menopausal status showed no association. Their result is consistent with the previous meta-analysis performed by Yuan et al. in 2011.

A meta-analysis from Zhu et al. provided evidence that TT/CT genotypes of NQO1 C609T were associated with a significantly increased risk for digestive tract cancer (DTC). When stratified for tumour location, the results based on all studies showed the variant T-allele might have a significantly increased risk of upper digest tract cancer (UGIC), but not colorectal cancer.

The subgroup analysis by ethnicity however, revealed a significant association for colorectal cancer in Caucasians. This analysis included 21 case-control studies with 6 198 cases and 7 583 controls.

Findings mentioned above is similar to the results found in several previous meta-analyses. Yu et al. (2012) reported that the CT/TT genotypes of the NQO1 609 C>T polymorphism were associated with a modestly increased risk of GI cancers. Following further stratified analyses, the increased risk was only observed for colorectal cancer in Caucasians. Another previous meta-analysis by Chao et al. (2006) found an association between the T-allele and an increased risk for colorectal cancer among 1 637 cases and 1 854 controls in the Caucasian population.

In a 2014 meta-analysis investigating the genetic susceptibility of the C609T polymorphism to gastric cancer in 4 000 subjects, Hu et al. found that the variant T-allele was associated with a significantly increased risk to gastric cancer occurrence, especially in Asians.

Guo et al. (2014) conducted a meta-analysis incorporating 12 case-control studies (3 041 cases and 3 128 controls) which suggested that the C609T polymorphism is significantly associated with increased bladder cancer risk in Asians, but not in Caucasians. The results of the present study are in contrast with a previous meta-analysis conducted by Chao et al. who found an association between the C609T polymorphism and an increased risk for bladder cancer in Caucasians, but not in Asians. It is speculated that the relevant environmental exposures are different in Asian and Caucasian populations, thus there may be some alternative ways in the populations to detoxify carcinogenic compounds which can compensate more effectively for the loss of NQO1 enzyme activity.

Breast cancer is related to multiple risk factors; modifiable ones have been reported to include high endogenous oestrogens, hormone therapy, and lifestyle including diet, physical activity, alcohol consumption, tobacco abuse, and other risky behaviours.

Cruciferous vegetables (Cruciferae or alternatively, Brassicaceae family) such as bok choi, broccoli, Brussels sprouts, cabbage, cauliflower, horseradish, kale, kohlrabi, mustard, radish, rutabaga, turnip, and watercress are rich sources of sulfur-containing compounds called glucosinolates, the precursor compounds of isothiocyanates and indoles. Isothiocyanates are described as a family of anticarcinogenic compounds where each glucosinolate precursor is hydrolysed into a different isothiocyanate; e.g. broccoli is a good source of glucoraphanin, the glucosinolate precursor of sulforaphane. Epidemiologic studies indicate inverse associations between the consumption of cruciferous vegetables and the risk of lung, colorectal, stomach, breast, prostate, and other cancers, but studies are not all consistent.

Dietary supplements containing extracts of broccoli sprouts, broccoli, and other cruciferous vegetables are available without a prescription. Some products are standardized to contain a minimum amount of sulforaphane and/or glucosinolates. However, the bioavailability of isothiocyanates was found to be much lower with the consumption of broccoli supplements devoid of myrosinase than with the consumption of fresh broccoli sprouts. 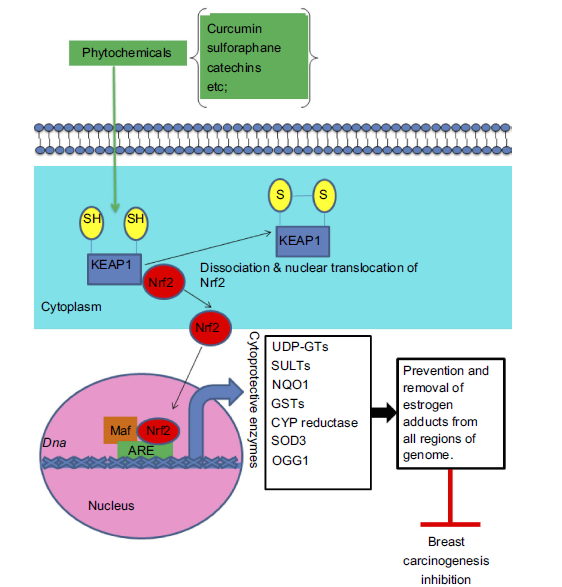